Guide about interior lighting for architecture with Blender 3D or YafaRay

In architectural visualization we consider the light of interior scenes, one of the most critical stages of a project, because it can really turn a great model into a poor scene, and make a simple scene gain life, with a well planned illumination. If you choose to use an advanced render engine such as YafaRay, most of the illumination will depend on your knowledge about the setup of the renderer, but for users that wants to use a renderer without global illumination capabilities, like Blender internal renderer, a few tricks will be required to create a good light setup.

If you want to learn a few tricks about light setup with both Blender internal renderer and YafaRay, there is a great tutorial by an artist called Marek Skrajnowski. The tutorial is divided in five parts and covers the render of an interior scene. There you will find a link to the second part.

This is the scene used by the artist to illustrate the techniques: 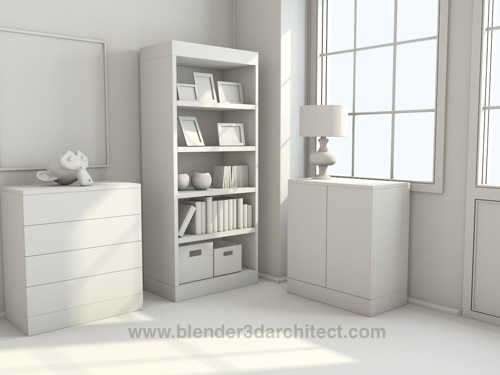 Unfortunately I couldnâ€™t find the other parts of the tutorial, but for interior lighting only the second part will be enough. Here are the links to both tutorials:

The first text explains all about the default lamps of Blender, and how to create and use a sky and combine them with ambient occlusion renderings. All that explained with a brief intro to composite nodes to tweak the rendering and get different effects with lights.

In the second tutorial we will find the most suited material related to architectural visualization. If you never tried to render an interior scene with only the blender internal render, after reading the tutorial you may want to make a few tests. Just like in the first part of the tutorial, the author explains how to get effects such as contact shadows and tweaking the render with composite nodes. At the end we get an overview of how to get the same effect using YafaRay, which will work great as a comparison between both techniques.

Even with those techniques, I believe that architects and artists won't leave softwareâ€™s such as YafaRay, LuxRender, Indigo and others to use only blender internal. This type of software is a success among artists, because of the easy setup required to render a realistic scene. In some cases, it's only a matter of place de sun light and set the correct materials.

Well, if you know where to find the other parts of the tutorial, post the link on the comments and I will be glad to update the article with the other parts. I could only find the first two parts.