The Siggraph of this year showed how strong the real time render technologies will come to the workflow of all 3d artists in a short time. Almost all tools are based on GPU power to render scenes in real time, which will demand even more from the video cards of your computers. One of the things that caught my attention from all presentations is that almost all companies showed their render engines using some sort of architectural visualization scene. If you were unable to visit Siggraph this year, like me, we can see a lot of the demonstrations from videos and photos taken by people that were actually there.

The first company that demonstrates a real time render based on the GPU was chaos software with their V-Ray RT. Their render engine is still under development and only a part of the software was showed. One of the visitors recorded the presentation in video and the CG Architect is hosting the video. In the video we can see the renderer in action, creating the interactive experience for a detailed coliseum model, using Physical Skies. Apparently, one of the down sides of the renderer is that at the video is not clear if we will be able to move objects or change settings of lights, during the interactive simulation. 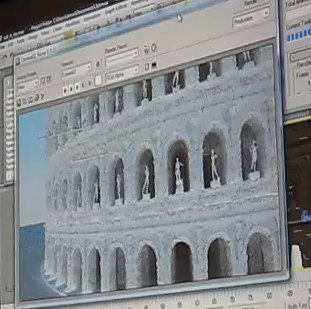 Another impressive demonstration is from the guys of Caustic Graphics with Brazil Interactive at 3ds Max 2010. Their software doesnâ€™t need to pre-compute anything from the scene and the changes made to objects, lights and cameras are updated almost in real time. There is a video with the demo of the software, where we can see a high detailed architectural modeling with an exterior view, rendered and updated in real time. Visit this link to watch the demonstration of Brazil Interactive with 3ds Max 2010.

The last one is the mysterious IRay from Mental Images, which some people are calling the Mental Ray RT. This is a physically based real time render engine based on the GPU. Itâ€™s a mysterious render because no one could find any photo or video about the render, but people that visit the Mental Images demo at Siggraph, confirm that it exists and the renderings have an amazing quality and speed.

All those examples show that in a short time, we will be developing architectural visualization with the manipulation of an already rendered scene.