Tutorials about global illumination with Blender 3D and YafaRay

The most common external renderer to use with Blender 3D is undoubtly YafRay, which is called today as YafaRay. In the past few years I was a heavy user of YafRay to produce architectural visualization renderings, but since YafaRay become stable, I`m always using YafaRay to setup new scenes, especially when I have to create some kind of animation. The overall result of unbiased renderings is quite good and demands only a few adjustments to the scene. But, sometimes an unbiased render engine is not suitable for production, because it will require a long time to render.

With this huge change to YafRay core, in the upcoming Blender 2.50 the option to render with YafRay, available at the Scene Panel will be removed. So, you will have to migrate to YafaRay! In my case, I will have to keep a copy of Blender 2.49 and YafRay 0.0.9 as a way to open and make adjustments to old projects.

Well, if you want to learn a bit more about the features and overall configuration of YafaRay, I have found two great tutorials with detailed instructions and a lot of rendered images. They are a great complement to the official tutorials, because we can follow the explanations with some rendered images, and save the time to do it by yourselves. 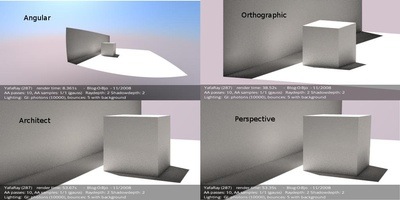 The first tutorial is a general guide to YafaRay written in French, but nothing that can`t be translated with a little help of Google. This guide covers all areas of YafaRay like lights, materials, render settings and other features.

And the other tutorial is dedicated to the best method to render internal images with Blender and YafaRay, which is the Photon Mapping. The guide covers almost all settings required to setup an interior rendering using Photon Mapping in YafaRay. For instance, do you know the effect of using Final Gathering? Or how to remove noise and artifacts from corners of the scene? Well, a quick read of the tutorial will give great hints about all those settings.

If you want to use YafaRay as an external render engine, I strongly recommend you to read carefully those articles. And for those of you that are still using the old YafRay, maybe it`s already time to start thinking about a change.