Last week a new version of the Open source Unbiased render engine called LuxRender was released. It`s been quite awhile now since the last time I have used LuxRender to make any kind of rendering for a project. This new version has a great list of improvements and I decided to give it a try again, and this time on my Ubuntu workstation. If you want to try too, it`s actually quite simple to download and compile the source code of LuxRender to use it under Linux. You can find all instructions to download and compile LuxRender in this link.

After all the process of downloading and compiling the source code, the integration with Blender 3D work out with a script called LuxBlend, just download the script file and place it in the Blender scripts folder.

When you run the script for the first time, it will ask for the luxRender folder.

How it works? I have to say that I`m most used to work with Indigo and Blendigo, and the LuxRender seems to have a lot more options to setup the render. At least more than Blendigo, but it doesn`t mean it`s better or worse, I`m just saying that it has more options. Here is a collage of four menus from LuxBlend.

For testing purposes I use a simple scene, to see how the sunlight simulation works in LuxRender.

The scene is a kind of room, with openings at all sides to allow sunlight to easily enter in the environment.

What`s the best settings for this scene? The image below shows the main settings.

I have to say that this render took about 5 hours to finish! I`m still learning how to setup the options in LuxBlend, so we can`t take any conclusions about the LuxRender render speed based on my test. 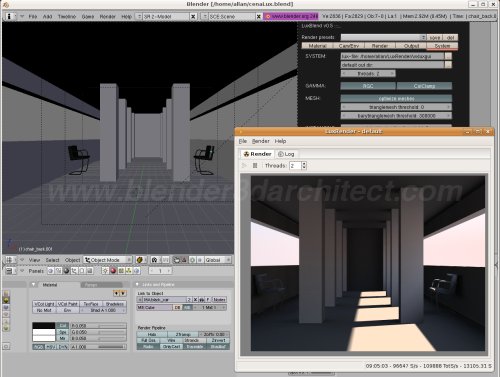 Of course I would get the same scene rendered a lot faster on Indigo, not because it`s better or faster, but because I`m more used to it.

So, what`s the point of this test? Just use LuxRender? Well, besides the long render time, I can say that this test shows me that LuxRender can become a great option to render in Blender, and especially in Linux! The software is still in development, and probably we can expect more updates soon.

I will try to render more scenes with LuxRender, and when I get the right settings for a few of my projects, I will post them here.

At least one thing I can say for sure, I will keep a close eye on the project updates!