How to use the lampspectrum for interior rendering in LuxRender

One of the things I like the most in LuxBlend is the presence of presets for almost anything on the exporter. Every time I show LuxRender, YafaRay and Indigo to my students at anyone of my classes, the inexperienced students feel more comfortable to use LuxBlend and render their projects with LuxRender, because of the presets. It`s easier for them to start exploring the presents and make a â€œquickâ€ rendering of a project and with time they start to play around with the settings. I miss that in the YafaRay exporter and in Blendigo as well. This last one is in the process of redesign by the guys of Glare, but it`s only a wip so far. I hope they add presets like the ones available in LuxBlend.

The downside of those presets in LuxBlend, specially the ones related with lights is that we have to sometimes render the scene to check how everything will look like. But, there are some charts and useful tables with render tests showing some of those options already rendered. For instance, the light material can have several textures assigned that change the behavior of the light. One of those textures is called lampspectrum and when we choose it as the texture of our Light, it will show a great set of presets with several types of lamps. 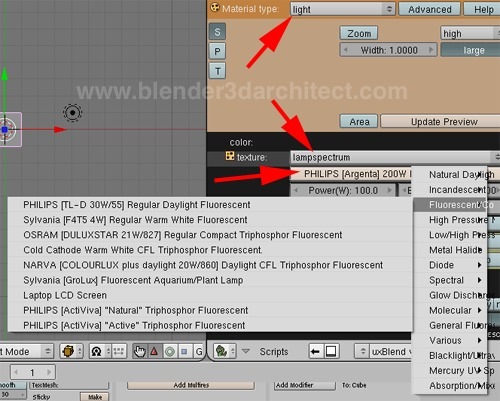 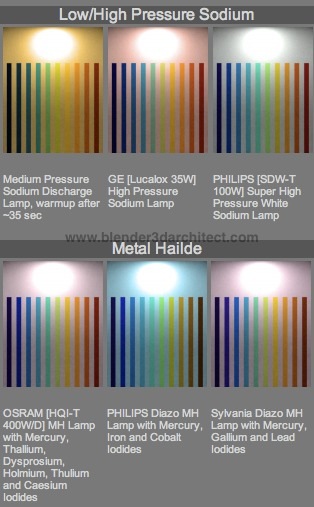 There is a chart at the LuxRender Wiki showing those lamp spectrums in a rendered view, which makes our job to pick one of them a lot easier. The updated chart can be viewed in this link. This is a great resource for interior renderings related with interior design projects, where we must decide and choose a lamp type for the scene, without the help of any information from the project author. Just pick a lamp from the chart and add it to the scene as a material.