In the next Blender major release, which will be version 2.80 you will see a lot of new features and resources for architectural visualization. Among those new tools is Eevee, which is a promising new real-time render engine.

A real-time render engine is something we already see regularly on a game engine like the Unreal Engine. But, to get a 3d visualization in real-time from Blender nowadays you would have to either export the project to a Game Engine or use the Blender Game Engine.

Both options would require you to adapt materials, lights and a significant amount of information from Cycles. With Eevee, things will become incredibly easy, and you will be able to create realistic real-time visualizations quickly.

Do you want to see another experiment using an architectural project using Eevee?

An artist called zajooo made a comparison between Eevee, Cycles, BI and the Unreal Engine. The results of his tests are available at this thread at the BlenderArtists forums. There you will find information about render times, hardware and more. 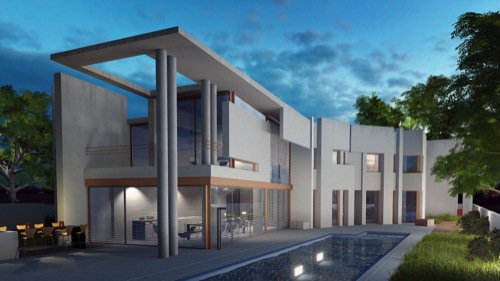 The output resolution of the project is 4K. According to the artist, he was able to get all final images in about 10 minutes.

When should we expect Eevee to be ready for production? Blender 2.80 will likely release sometime at the beginning of 2018.