From all the upcoming features in future Blender releases, I believe that Eevee is by far one of the most exciting resources. Not only it will give you a brand new real-time render, but also a way to create animations for architecture quickly.

Eevee is still in early stages of development and should not go anywhere near a real project, at least until it reaches a stable release.

But, a few artists are already trying to put Eevee to work, and we might have found one of the first architectural visualization projects using Eevee.

An artist called ahmedyounis75_3 posted an impressive project at the BlenderArtists forums, using Eevee for rendering. 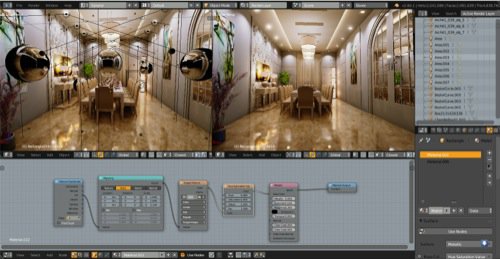 You won't see much images from that project, only a screenshot from the scene using Eevee. That is more than enough to give you a glimpse of what to expect with the use of good textures, lights, and a good GPU.

Why is that a big deal? Remember that it is a real-time render engine. Meaning instant render no time needed to “cook” the image or to get rid of noise. Using a technology like that to generate images for architecture will definitively change the way we work with Blender.