Open-Source software like Blender always invites users to get the source code to make changes and add new features, tools, or change the user interface. Those changes sometimes will merge with the main Blender releases or give birth to fork projects.

We already made a list of some fork projects based in Blender, and among them, you will find Fluid Designer. From all the options in our list, Fluid Designer shows some unique characteristics.

It was not an initiative of a user, but from a private company (Microvellum), and with a focus on furniture design. They wanted to turn Blender into a tool to create kitchen cabinets. 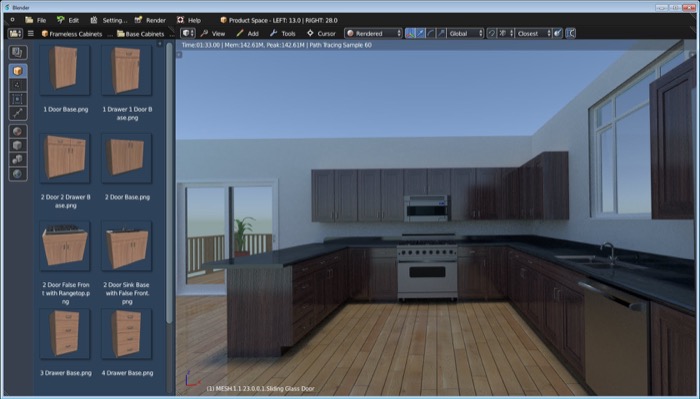 BA: As part of the development of Fluid Designer, can you tell us your role in the creation of the software?

Andrew Peel: I put together the original concept of Fluid Designer (Use Blender as a platform to develop an intuitive kitchen, bath, and closet design software). Once the project was approved, I was assigned as the lead developer for the project.

BA: Did you have any prior experience with Blender before Fluid Designer?

Andrew Peel: I started using Blender on a regular basis in early 2012. I spent a little over a year learning Blender and developing a prototype of what is possible with Blender. In 2013 I was put on full-time development of Blender/Fluid Designer.

BA: How was the experience of getting Blender and transforming it into Fluid Designer? Were there any discussions about the UI or UX?

Andrew Peel: The experience of transforming Blender into Fluid Designer was challenging and enjoyable. The majority of the discussions about the project revolved around UI/UX. The idea was to make an easy-to-use design platform, and with Blender being a very powerful and complex application there was a lot that had to be simplified and automated for the user.

Some of Blenders default user preferences were the first things that were changed. After that, a lot of time was spent iterating over different UI layouts and workflows. Implementing a right-click property interface and drag and drop asset placement got a lot of positive feedback and many users found it to be easy to work with.

BA: Can you describe the business plan for Fluid Designer? Did the plan change during the course of development?

Andrew Peel: The plan was to add value to Microvellum's existing engineering and manufacturing software, by providing a free easy-to-use design platform that seamlessly connected to the manufacturing modules. As development went on Microvellum experimented with different ways of generating revenue including, selling assets, subscriptions, and developing custom implementations for large manufacturers.

BA: If not, can you share with us what went wrong? Did the company lose interest?

Andrew Peel: Nothing really went wrong. Microvellum wanted to focus all of the development resources on the manufacturing and engineering modules. Creating a simple design solution is still on Microvellum's radar, but they would like to plan it out a bit more before they start up development again.

BA: Can someone else take the source code to continue developing Fluid Designer? Where?

Andrew Peel: Fluid Designer is licensed the same as Blender so anyone can continue to develop Fluid Designer. Microvellum is not maintaining the source code anymore, but the source can still be downloaded from Github. If there is anyone out there interested in architectural tools for Blender, I would recommend taking a look at the archipack project. This project is actively being developed and the developer, Stephen Leger, has been making incredible progress.

BA: Are you working on any new project related to Blender?

Andrew Peel: I have been looking into the Archipack Add-on and getting familiar with that project. In my spare time, I plan on helping Stephen with streamlining the process of creating architectural designs. The application template feature that was added to Blender 2.79 has also peaked my interest. I have been working on an application template that streamlines and simplifies the general usage of Blender. The Application Template is called BlenderPro. Feel free to check it out at https://youtu.be/FAdiGHwfDkQ