Volumetric rendering for interior visualization with Blender and LuxRender

The use of atmospheric effects and tools such as volume rendering are not very common between architectural visualization artists, because their use is always related with more dramatic scenes or scenario design for tv or games. In Blender we have an option to create volumetric rendering with the Halo button at the Spot lamps. If we turn this button on and setup all parameters correctly, the light rays will become visible in some sort of fog generated from the lamp.

When the project must use an external render to generate the image and global illumination algorithms like YafaRay or LuxRender, the halo button won`t help us to create volumetric renders.

How to work with volume rendering in LuxRender? Even at the LuxRender documentation there isnâ€™t much information about the procedures or setup of the scene to create this effect. I was browsing LuxRender forums this week and just found out a small tutorial created by a user called Dade. Here is the result of the tutorial: 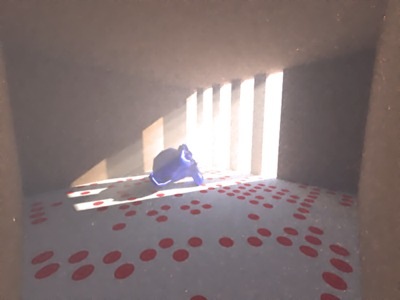 If you want to learn how to setup LuxRender for volumetric render visit this link. And the best part is that we can download the full scene with the setup to study.

The trick to create this scene involves basically two things:

If you don`t see much result in a render test, the secret to get a good volume is to find the right settings for the boundvolume parameters. From what I could test here, depending on the settings we will see an extremely dense fog, resulting in a bright image or a weak and almost invisible fog.

The render time for the scene will be increased if the volume is present at the project, so be ready to wait a lot more than the usual.