What is this feature called Multilight? This is an incredible feature of Maxwell Render, which allows an artist to change the color and intensity of a light source, while the render process isn`t finished. That's right; we can actually make adjustments on-the-fly, and even create a cool animation of the light changes. Well, all those features and possibilities are available to anyone with a Maxwell Render license, but an option similar to Multilight is now implemented on Indigo Renderer, and the name of that feature is Layer Blending.

The Layer Blending of Indigo has showed up a few weeks ago at Indigo 1.1.6, and works pretty much like Multilight. Of course, the Indigo feature is still in development but it already shows a lot of potential. 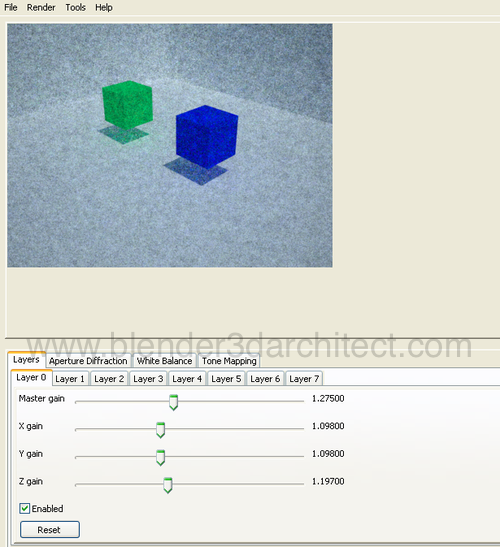 If you want to see, what it`s capable of doing, visit this link at the Indigo forums. There you will find a nice animation, made by an artist using Layer Blending. And this link shows another great example of scene and animation made with the Layer Blending feature.

By now, there is only two down sides of the feature:

I have made a lot of testing here, and the tag <layer>, which setup and object to be a layer only works with materials.

I`m still trying to learn more how about the setup of each light layer, and make it works like an independent source. By now I know that the <layer> tag only works with materials, every time I tried to add it to a light source Indigo shows up an error message and quit the rendering process.

Well, if you want to give it a try and test the new feature, be ready to do a lot of copy and paste. Even with a feature that isn`t much friendly like that, we can be sure that Layer Blending will be a powerful feature in Indigo.