After a long pause, I`m finally back to the blog. This long time without updates was due to the revision of my Brazilian Blender book, which is going to the third edition. I guess it`s a great milestone for me, after all, the editorial market here in Brazil is not that big, and it shows that Brazilian artists are getting interested in Blender. The Apricot project (Yo Frankie!) is calling the attention of game artists and developers, I`ve received almost five messages a week, with people interested in learning Blender to develop games.

Now, let`s get back to Blender and architectural visualization.

A brand new version of Blender is out, Blender 2.47! This is mostly a bugfix release, but it doesn`t mean that new features aren`t available. In fact, there are new features for this release! Unfortunately, the Grease pencil system was not on of them. What about the new features? Most of them are related to the Yo Frankie! (Apricot) project, and involves the new snapping tools, already mentioned here and new options for the Logic Panel of Blender. If you work with architectural visualization, there aren't many improvements besides the new snapping tools. 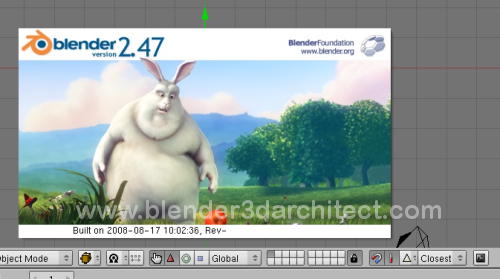 Since we talked about Blender improvements for architectural visualization, I haven`t mentioned a really cool project going on at the Blender Wiki. It`s called BlenderArchiProject, and the goal is to gather suggestions to improve Blender, or develop new tools specially for architectural visualization. If you have any ideas or suggestions, just make a user at the Wiki and put your ideas there.

Here are a few areas that could get improvements, and new features that would help a lot the work for architectural visualization:

These are some of the items in my “wish list”, and almost all of them are listed on the BlenderArchiProject already.

Some of these features are already planed to be released with Blender 2.50, like the Render API. With this feature, Blender will be able to use a lot more external renders, and the new generation of YafRay (YafaRay).

If you have some other ideas, go there and put them on the list.