Controlling cameras for rendering with YafaRay

Earlier this week I was talking about how to control and make the camera of Blender 3D, behave like a real camera with settings such as ISO, Exposure and FStop with the help of LuxRender. Actually, we have to use those settings using the controls of LuxRender. This is a great way to make our renders more accurate to photography. When I mention the article to my students, some of them asked me if YafaRay could do the same thing with the camera. Well, in YafaRay we also have the ability to control several settings of the camera, but with a different objective.

In YafaRay the camera settings doesn't control the way light is captured, like we do in LuxRender. Instead, all controls are aimed to set how the camera works with effects like Depth of Field and aperture. If you want to know more about the behave and how the settings of YafaRay perspective camera works, there is a great thread at the YafaRay user forums, with several render tests made by an user called condar. 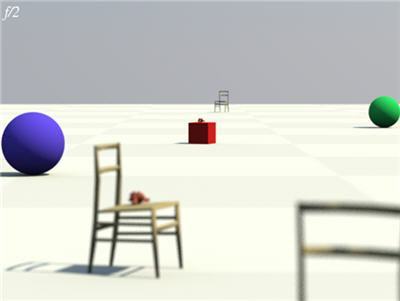 With the settings available we will be only able to control how wide the camera is or the point to focus on objects, to generate the DOF effect. This may be important to know, if your project deals with large environments of must highlight an objects placed on a set or room.

Another great option to use in YafaRay is the camera specially designed to be used in architectural visualization projects, which can reduce the barrel effect that distorts the vertical lines of a render. I have already talked about this type of camera, and if you want to check out how to use it and a simple example of a render made with this camera, visit the link,

Those aren't the only options to add more realism to camera setup in Blender. There is an incredible script that adds a wide range of controls to the Blender 3D internal camera, making it quite easy to do camera match in real photos. The script is called Blenses and add real world and camera settings to Blender 3D.