When you think about an architectural visualization presentation, probably the first thing that comes to mind is either an image or video. Both methods work great for most projects and will do the job of visually describing how the scene will look by the time the project comes to reality.

But, with the technology we have at our disposal nowadays, we can go beyond bidimensional images.

Do you want to see an example of an unusual, but modern way, of showing an architectural visualization project? An artist called jokotriyono posted a project in the BlenderArtists user forums with a 360 render of a kitchen scene.

How to render a scene in 360 just like the author of this great example of architectural visualization made with Blender? In Blender, you can achieve the same results with a simple option in the camera settings. Just set the camera type, in Cycles, as panoramic and then pick the equirectangular option. And you are all set to render scenes as 360 images. 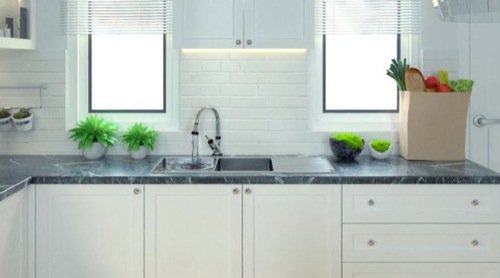 Using that option will make Blender render the scene from all direction, based on the camera location. Keep in mind that you will need a much more significant resolution to create crisp images with that format. If you were using resolutions close to FullHD, consider doubling the size to get crisp images.

With the same amount of pixels, you will have to display a lot more information.

Do you want to learn how to present your project using 360 images in an immersive technology? In Blender 3D Architect we have a course about VR architecture with WebVR that explains all necessary steps to convert your projects to VR. Not only VR but using cutting-edge technology that puts VR to the web.

Your customers don't have to download any custom app. Everything works straight in the browser.