For architectural visualization artists working with Blender, one of the most requested features for 3d modeling is the ability to work with CAD like tools. There are even a few projects trying to get CAD like tools added to Blender using Python scripts. With the release of Blender 2.5 and his new add-on system, some of those tools are starting to appear, and best of all, blended with the new user interface. One of those tools is an add-on called Slice to Intersection, which works pretty much like some CAD commands we are used to find in softwares like AutoCAD.

To try this add-on, we have to download the script file from the link provided at the Blenderartists thread, and place it at the Blender 2.54 add-ons folder. When it is there, go to the User Preferences window, and activate the Slice to Intersection.

The add-on works with two edges of the same Mesh object, where it can either connect those edges or split them into two separate edges, using the point of intersection. Here are a few examples of how it works, taken directly from the thread at the Blenderartists forums. First of all, we must select two edges in Edit Mode: 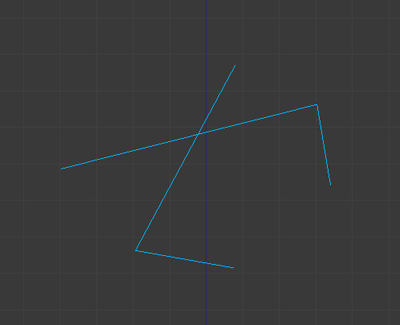 Then, with the W key we will use specials menu to choose the add-on.

The result will the something like an extend or fillet command from CAD softwares. The edges will be extended until the get connected.

With a different selection, we will get the edges separated.

I know this is not much, but with an add-on like this we can start to create 3d models with better precision and control over the polygons. The script was created by an user called zeffii.