The light setup of an architectural scene may require a series of tests and experiments until we find the right feel and look for the project. A lot of architectural projects try to simulate the light of a project on certain hours of the day, when the sunlight is strong and coming through any window at the scene. But, how could we create a scene with the soft light from the sun in the morning? A file posted at BlendSwap shows us an interesting way to light a scene using this soft light effect, with three different views of an apartment. My favorite is the kitchen!

Besides the light setup of the scene, which is all made using Cycles, we will also be able to use some of the objects on other projects. The kitchen has lots of small objects that could be easily imported to other scenes. 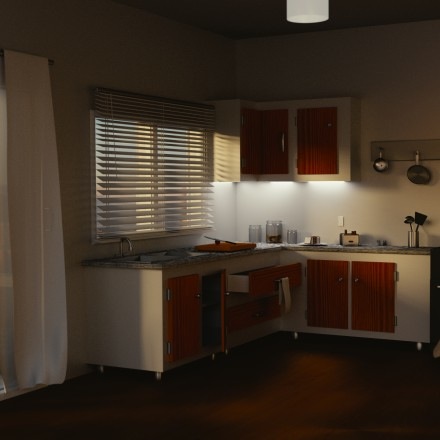 UPDATE: For some reason the author of the scene removed the file from BlendSwap.