This week I got an interesting request from a client for an architectural visualization project, involving the creation of an animation showing the full workflow of the development for a commercial building. The unusual request is that all images must look like it has been made with pencil sketches. Today most clients demand images with photo real quality, which leads us to use external renderers and techniques such as photon mapping, path tracing and others to better illuminate the scenes. In Blender 3D we have an interesting option to turn on edges for the objects when the image is renderer, which gets really close to the result of an NPR render. But, only using the edges won`t give the full effect of an NPR render.

How to solve that? My first thought was to check out the integration between Blender 3D and Freestyle, which is still in development by Maxime Curione, and it`s not suitable yet for production environments. This is an important project and I don`t want to take unnecessary risks. Taking a look at my bookmarks I found two useful tutorials about the creation of NPR images using only the internal render of Blender 3D and the Node Editor. 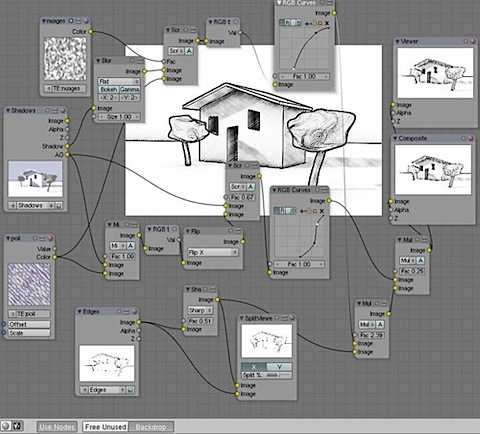 The tutorials were created by an artist called Matthie Dupont and are divided into two parts:

In the first tutorial we will learn how to setup a scene and the proper node composition to have an image with rough edges and the look of a sketch. The result can be achieved in a short time and the render time is very low, compared with the rendering with YafaRay or LuxRender. The second tutorial shows another set of nodes to create an effect of pencil sketch painting. And we get an effect just like a filter from either Photoshop or GIMP. Since it`s all made with the composite nodes of Blender, we can use all the setup in animation, which is exactly what I need.

Along with the tutorials, all source files with the node setup already created are available to download. This a great resource for quick and stylized renders for architecture.