From all predictions about the future of architectural visualization, one of them is becoming a reality right now, and itâ€™s the adoption of realtime rendering technology to make presentations and develop projects side by side with clients. A realtime render engine os designed to help on the development, and not produce photo real images for marketing or sales purposes, like the render engines we are used to work with in architectural visualization projects. There are options to work with cpu or gpu based rendering, like the versions of V-Ray RT that works inside 3ds Max (cpu), or the standalone version that uses gpu.

Another renderer with a RT version presented on the las few months was iray, which is something close to a Mental Ray RT. I remember reading about iray from reports of the visitors of SIGGRAPH 2009, but never had a chance to actually see or watch any renders or examples from iray. A few weeks ago I just found an example posted at the Mental Images website that shows iray in action, and we have a large example of the application of the software in interior design, which will be helpful for architectural visualization artists. 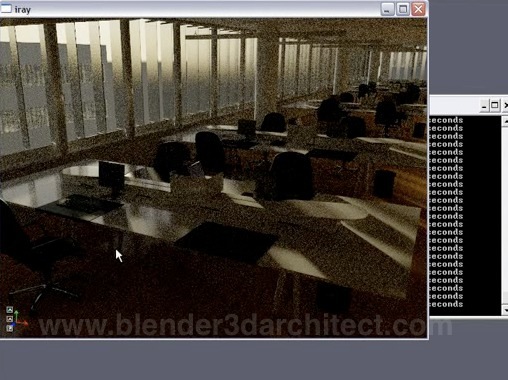 One of the things I like about iray was the rendering brush, which allows us to remove the noise from a part of the image and show a cleaner version of the image. Imagine to use a tool like that with a team or to show the development of a project to a client.

I hope that in the near future an open source render turns out into the realm of realtime render, and allows us to use it along side Blender 3D. The Blender game engine was not desined for this type of render. Imagine a YafaRay RT or LuxRender RT?

If you want to see more examples of realtime rendering, go check out the new Youtube channel of Chaos Group, with a few videos demonstrating the use and application of V-Ray RT with design visualization projects. It`s not related directly with architecture, but could help anyone involved with product design or general 3d computer graphics.