I`m working at a very simple project now, you may remember it from my previous post, which is a living room model rendered with Indigo, and modeled with Blender 3D. This last weekend I got some time to update the model and render it again, with a few more details. Most of the details are decorative objects like vases, portraits and a console table, and two paintings from Matisse, one of my favorite artists.

Is it a commercial project? No, actually it is a scene that will be used in an e-learning class I'm working on here in Brazil. Maybe in the future I will release an English version of the course as well. The scene is now complete! This course will be all about this project, where the students will learn to create this scene from scratch.

Here are a screenshot of Blender, with the scene:

And the last rendered image, which take almost 2 hours to render. I know it may seem long, but it`s the way Indigo works. 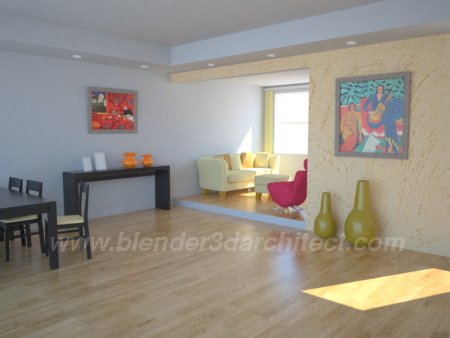 Why not use YafRay for this scene? The first reason is that the e-learning course will be about “Interior design with Blender 3D and Indigo”, and the second one is that sometimes it`s good to have an option to YafRay. And for me now, Indigo renderer is becoming a very good option to YafRay. While YafaRay doesn`t reach a stable release, I will try to start some of my projects with Indigo.

This week I will try to work on a few extra objects to the scene, and create a night shot of the scene with IES lights.

Since I have used a few models from Resources blogscopia, I have decided to share the console table model, which I have modeled in Blender, based on a console table I saw on a magazine.

Here is a rendering of the console, with a studio setup in Indigo: 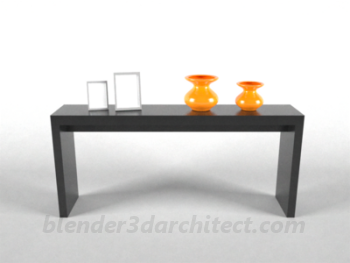 The console has two small vases and two portraits above it. Let`s see how to model it. You can download the model from this link (Please, don`t make direct links to the file).

And that`s it, another finished project. Let`s move on to a new one!