How to add 3d dimension lines to Blender?

Is it possible to add dimension lines in Blender 3D? Yes, it is! Of course, we need a special Python script to do that, but that's only a small detail. Dimension lines are not a common object for a 3d project, where we want to show more of the visual and look of the building or scene, rather then technical details, like measurements. But, after a small video presentation, you may want to show a few measurements of your project, just to reinforce the presentation or simply as a eway to set the overall scale for the project.

Every time I need to show the scale of my projects at a 3d scene, I always use the caliper script. This script is a great tool for anyone using Blender 3D to make architectural visualization. Not only because it can add dimension lines visually in 3d, but because it can help you do develop a project, adding information about your building or scene.

The script is available to download here, and along with the download link you will find a good set of documentation about it. The installation of the script is pretty simple, just copy the file to your Blender plugins folder, and it will be loaded at the Wizards folders in your scripts window. 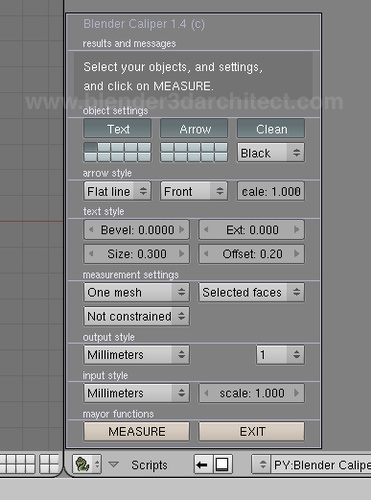 Another great thing about the script is that all dimension lines are actually objects. So, if you want to integrate it with an animation, or even put them at a single layer to hide the lines and text while you are still modeling, it will be an easy thing to do.

If you never used this tool, I strongly recommend you to try out!